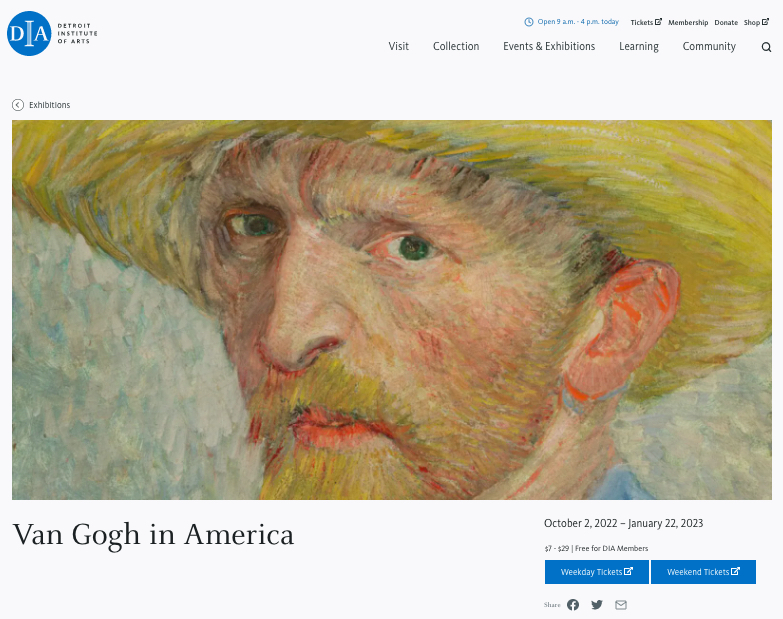 I report some interesting works of Van Gogh that I was exposed from the Van Gogh Exhibition, which has been open to the public since October 2, 2022. (Note: Digression is mixed)

[Part-1]
Van Gogh Exhibition at the Detroit Institute of Arts

Yesterday, I went to the preview of the Van Gogh exhibition, which will finally start tomorrow, October 2nd, at the Detroit Institute of Arts. I have enjoyed 70 more of his paintings gathered from all over the world.

First of all, the banner of the exhibition called Van Gogh in America at the entrance of the venue. The first thing that catches your eye is “Vincent’s chair with his pipe”. This masterpiece is from the National Gallery in London. Painted in 1888, it seems that madness has already taken hold of him. I will introduce some of my favorite works on Facebook as well, but I hope that you will visit the Detroit Institute of Arts and be moved by the real thing. The exhibition will run until mid-January next year.

[Part-2]
Van Gogh Exhibition at the Detroit Institute of Arts

This painting “Undergrowth with Two Figures” is a work by Van Gogh in 1890. It depicts two persons in the poplar trees and the colorful undergrowth that blooms at the base of the poplar trees, and the purple color is painted beautifully. It is said that this work crossed the Atlantic many times before finding a buyer. At that time, Van Gogh’s name and works had not yet received much attention in the United States. The work was finally bought in 1929. It has since changed owners, but finally in the 1940s, it was owned by Ms. Mary Johnston, a prominent Cincinnati philanthropist who left behind numerous achievements. She was a family member of the Cincinnati-based giant Procter & Gamble. When she died in 1967, the work was donated to the Cincinnati Museum of Art as part of her bequest, where it remains on permanent display. I saw this work at the Cincinnati Museum of Art two and a half years ago, and I was lucky enough to see it again at the Detroit Museum this time.

[Part-3]
Van Gogh Exhibition at the Detroit Institute of Arts

Prior to this Van Gogh exhibition at the Detroit Institute of Arts, a Van Gogh exhibition was held in Nagoya this spring. One of the works that stood out among them was this “Yellow House” (owned by the Van Gogh Museum in the Netherlands). In 1888 Van Gogh rented this house in Arles. It is a house that will be a joint living with Gauguin. The house no longer exists, but Van Gogh’s paintings left evidence of its existence.

The Detroit Institute of Arts did not display the Yellow House this time, but it did display “The Vincent’s Bedroom,” a painting of the second-floor room in 1889. This work is in the collection of the Art Institute of Chicago, but was included in a donation of 25 paintings by Mr. Bartlett of Chicago, a contemporary art collector at the time, in the 1900s. This work is preceded by two other paintings of the same bedroom, one in the Musée d’Orsay in Paris and another in the Van Gogh Museum in Netherland. According to the chronological order, the Van Gogh Museum’s work is first, then this exhibition work (Art Institute of Chicago), and the last one is from the Musée d’Orsay. Van Gogh also painted many paintings to decorate this house, including his famous “Sunflowers”.

[Part-4]
Van Gogh Exhibition at the Detroit Institute of Arts

This painting is a work of 1890 called “Daubigney’s Garden” (Kunstmuseum Basel). According to the commentary, he wrote a letter to his younger brother Theo, along with the most carefully planned painting that “I have envisioned since I came to Auvers”. In addition to the work exhibited at the Detroit Institute of Arts this time, there is another one at the Hiroshima City Museum of Art in Japan. I also saw this work in Hiroshima about three years ago.
The Basel version, which was exhibited at the Detroit Institute of Arts this time, was written first, but Van Gogh once again painted this Hiroshima version. The Basel version is drawn with strong brush strokes, but the Hiroshima version is a little weaker, the colors are slightly softer, and the color usage feels quite different. Did Van Gogh dare to paint the second painting with a different thought?

Another point that is clearly different is the black cat drawn in the lower left corner. Hiroshima’s work has traces of this black cat being erased. Nobody knows who did it. Either way, why did Van Gogh do this work with a lot of mysteries? There is a more detailed information here, so if you are interested, please refer to it >> https://jbpress.ismedia.jp/articles/-/6071

[Part-5]
Van Gogh Exhibition at the Detroit Institute of Arts

The last work allocated in Gallery in the Detroit Museum of Art exhibition (that is, located closest to the exit) is this 1888 Starry Night over Rhone (Musee d’Orsay). The Starry Night written with cypresses is also famous, but this work depicts the scenery of the Rhone River embankment during Van Gogh’s Arles period. Van Gogh wrote to his younger brother, Theo, that he had begun to take an interest in nightscapes. It is a work with a lot of brilliance, such as the different colors and brilliance of stars and gas lamps, and the reflection of those lights on the surface of the river. In addition, there is a lover couple in front of him, and it is a romantic painting that I also liked. Again going back to the Nagoya City Art Museum, there was also a painting of a night view titled “Road with Cypress and Star: Country Road in Provence at Night” from the Kröller-Müller Museum. This masterpiece was also allocated to the near the exit. People stood there with great satisfactions with the exhibits in Nagoya, too. I have attached a picture of the painting for reference.

Also, as an aside, “Immersive Van Gogh “, is a worldwide hit, and I have seen performances in Detroit. It’s as if you’ve stepped into a Van Gogh painting, and you’ll be using a lot of popular projection mapping images. Many of these starry night paintings shine and please your eyes there. It was an amazing experience.

In Tokyo and other big cities in Japan, such shows (for example, Monet’s) have been held for sometime, but the Van Gogh show will land for the first time in my hometown of Nagoya (next is in Kobe). The “immersive Van Gogh” show will be held from December 10th. (By the way, the price is $50 in the US and 2500 yen in Nagoya, which is a very reasonable price!!)

[First landing in Japan]
Held in Nagoya and Kobe! Immerse yourself in the world of Van Gogh, an immersive exhibition that touches the five senses of 8.5 million people around the world! Van Gogh Alive

[Part-6]
Van Gogh Exhibition at the Detroit Institute of Arts

This painting is the final piece of my report on the Van Gogh exhibition at the Detroit Institute of Arts. Van Gogh’s 1887 self-portrait. This work is a memorable work in January 1922 when the Detroit Museum of Art purchased Van Gogh’s work for the first time among many American museums. One of Van Gogh’s many self-portraits, this self-portrait wearing a straw hat was later made into a movie by master director Vincent Minnelli in the 1956 Hollywood movie “Lust for Life: Van Gogh.” Kirk Douglas’ make-up for the leading role was just like this self-portrait. The movie was a huge hit, and Anthony Quinn, who played Gauguin, won the Academy Award for Best Supporting Actor.

As an aside, I had the opportunity to visit the Otsuka Museum of Art in Naruto City this summer. This museum is very unique, and many masterpieces are drawn and baked on ceramic plates and displayed. You don’t have to go to museums or churches all over the world, but you can see it here in one place… but it’s not the real thing. At the Otsuka Museum of Art, they collaborate with museums, individuals, foundations, churches, etc. that own the originals and obtain permission to make them look exactly like the real thing. Shigaraki, Mie Prefecture in Japan, has their ceramic pottery factory!

I was very happy to find this work under the collection of the Detroit Institute of Arts in a hurry to see it in about 3 hours. In Otsuka Museum of Art

I’ve been reporting some masterpieces this time so far but I’ve been able to introduce just a part of them. I’m sure many of you know more about Van Gogh.

But seeing is believing! Why don’t you visit the Detroit Institute of Arts this autumn to see Van Gogh and have a good time?