Painting Indulgence at the Otsuka Museum of Art (Naruto City) 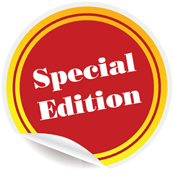 I am belatedly writing about my visit to the Otsuka Museum of Art this summer. In any case, I was very surprised to find that some of the world’s masterpieces, gems, temples , churches, caves , etc. were made. In addition, since they are colored and baked on ceramic plates, it is a famous museum that puts customers first (for Japanese people especially), where you can freely take pictures.

Of course, no pieces are real, but they are made in collaboration with the original owners to look like them. (The factory for making ceramic plates is located in Shigaraki, Shiga Prefecture, a famous spot for Japanese pottery.)

Unfortunately, I could only stay in the museum for about 3 hours, so I was in a hurry to see it. I missed many important works for sure.

Under such circumstances, I will divide the report into five parts to describe as many as I can introduce to you. 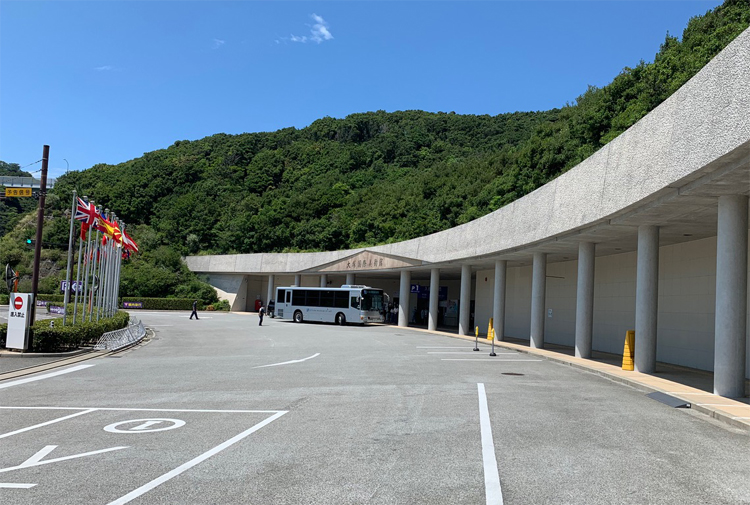 It is a modern building, and the scale of the museum is astonishing. The museum was built and opened 1998 as part of the 75th anniversary project of Otsuka Pharmaceutical Group. (Photo of the exterior) It seems that many bus tours come, so they have a large parking lot for them. When you go up with a long escalator, it will be the exhibition hall from there. This museum claims approximately 1000 Western masterpieces from 26 countries around the world. The viewing route is about 2.5 miles long. The entrance fee is higher than a normal museum. I think it’s about this scale. 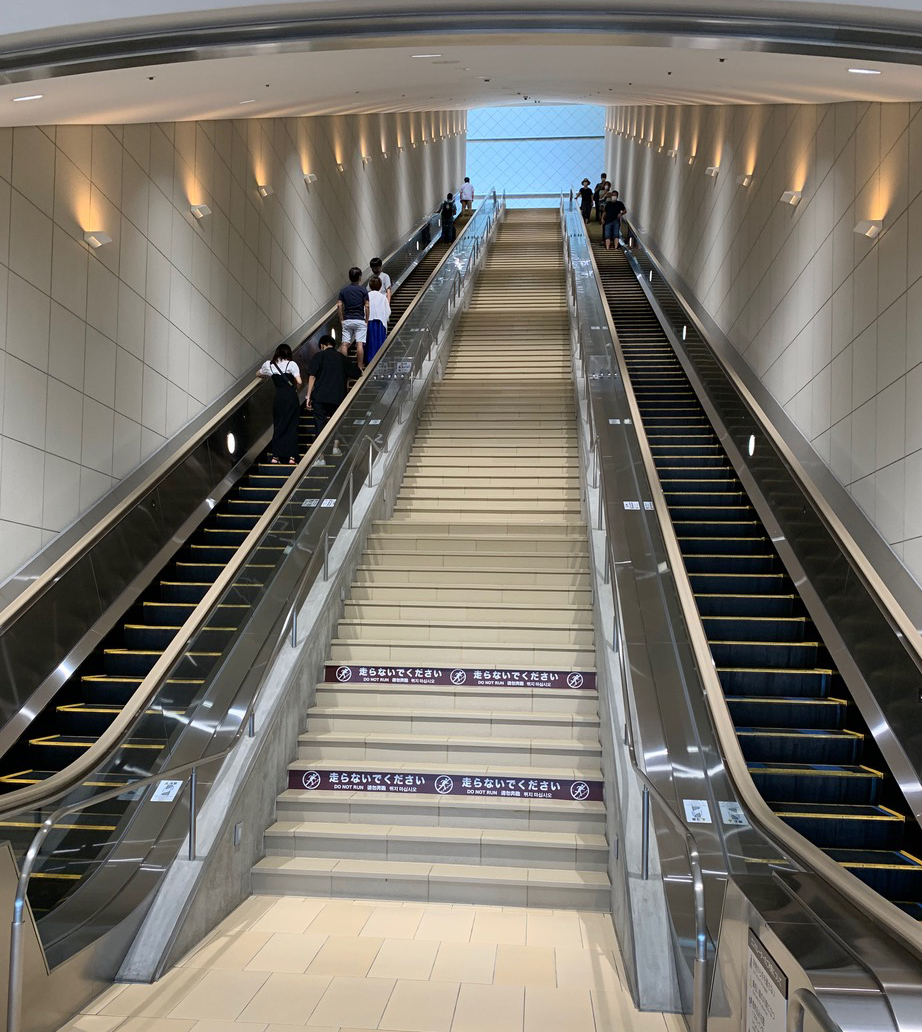 The first thing that jumps in is the ceiling painting and murals of the Sistine Chapel in the Vatican. Famous painters of the time (Raphael, Bocticelli, Perugino, etc.) all painted here. Michelangelo’s “Old Testament” of “Genesis” 9 chapters is drawn on the ceiling painting. Near the center of the ceiling is the “Creation of Adam”, which is very impressive. The Otsuka Museum of Art built this Sistine Chapel inside the museum. The ceramic plate is also curved precisely, and the technologies they put in are amazing. 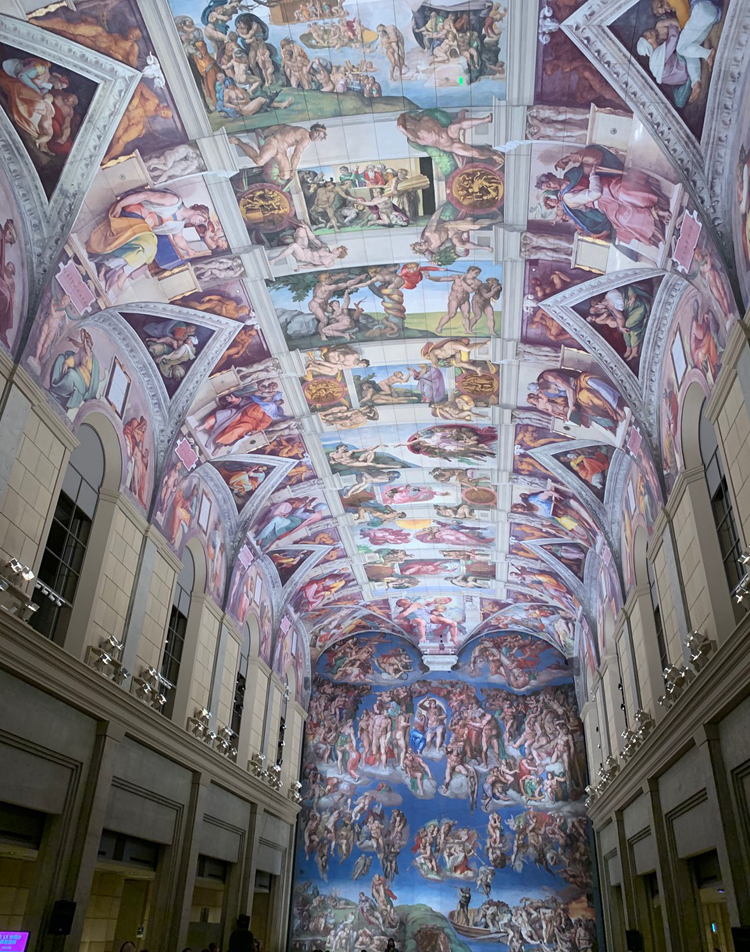 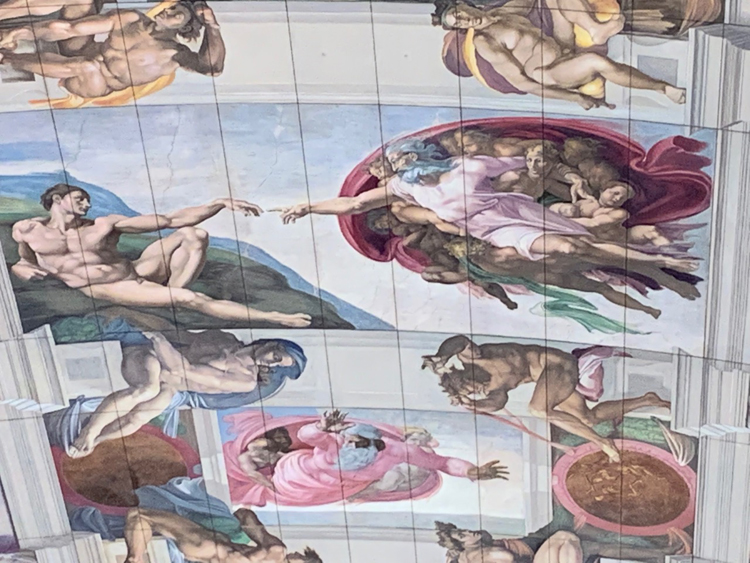 The Sistine Chapel made a huge impression on me, and when I went next, I entered the world of El Greco. This is an introduction to two works from the Prado Museum in Madrid, Spain and one from Toledo. As you can see in the photo, it is made of ceramic plates, so unlike the canvas, it is made by combining several ceramic plates instead of one. 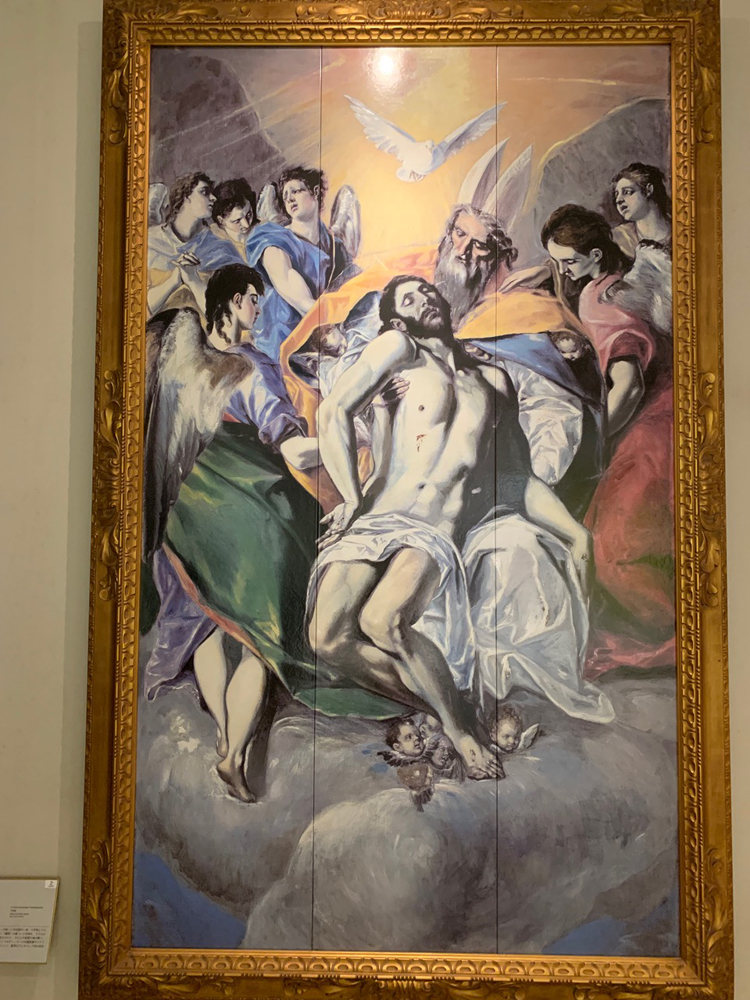 The first work is “Trinity”, a large work of 300cm x 178cm. It is said to be one of El Greco’s spectacular debuts in Spain. Next is “St. Andrews and St. Francis: St. Andre and St. Francesco”. This is El Greco’s mature work. Both saints are holding this with the cross shaped like an X. Both of them are drawn to be unusually tall, and they are magnified as if looking up from the top of the screen to the sky, and it is explained that the souls of those who see them follow the figure of the saint and are transported to heaven. 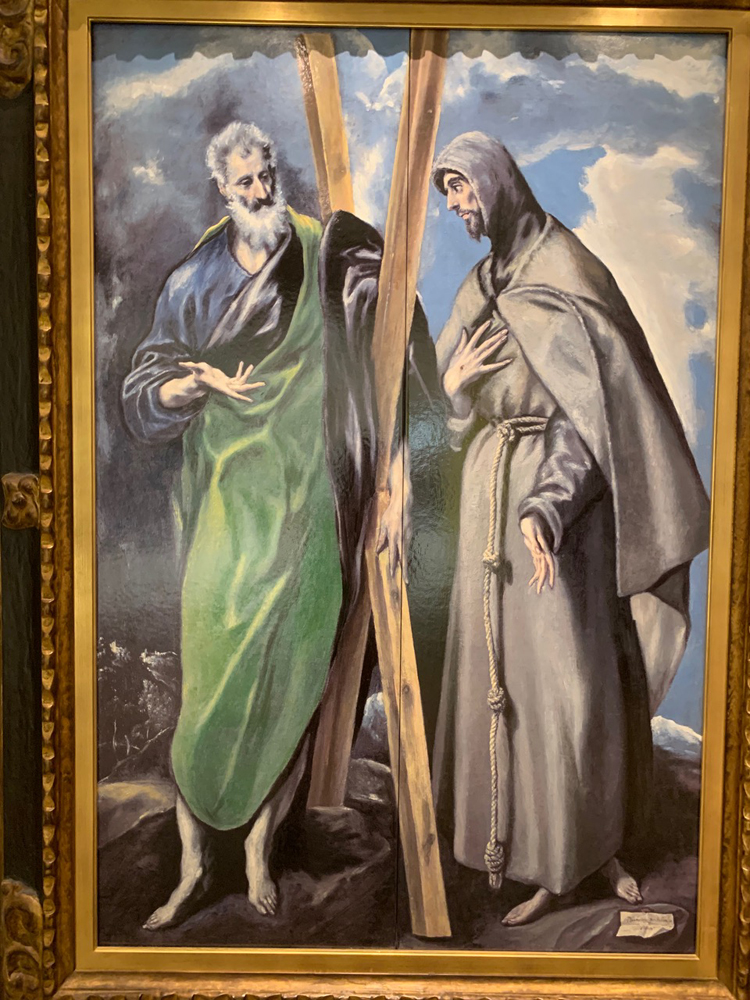 El Greco’s third work is the blockbuster “Burial of Count Orgaz ” (Cathedral of Santo Tomé, Toledo, Spain), which is said to define his style. With a composition that divides the burial and ascension of the dead into two parts, it is considered a masterpiece by El Greco, who mastered Byzantine and Italian art. 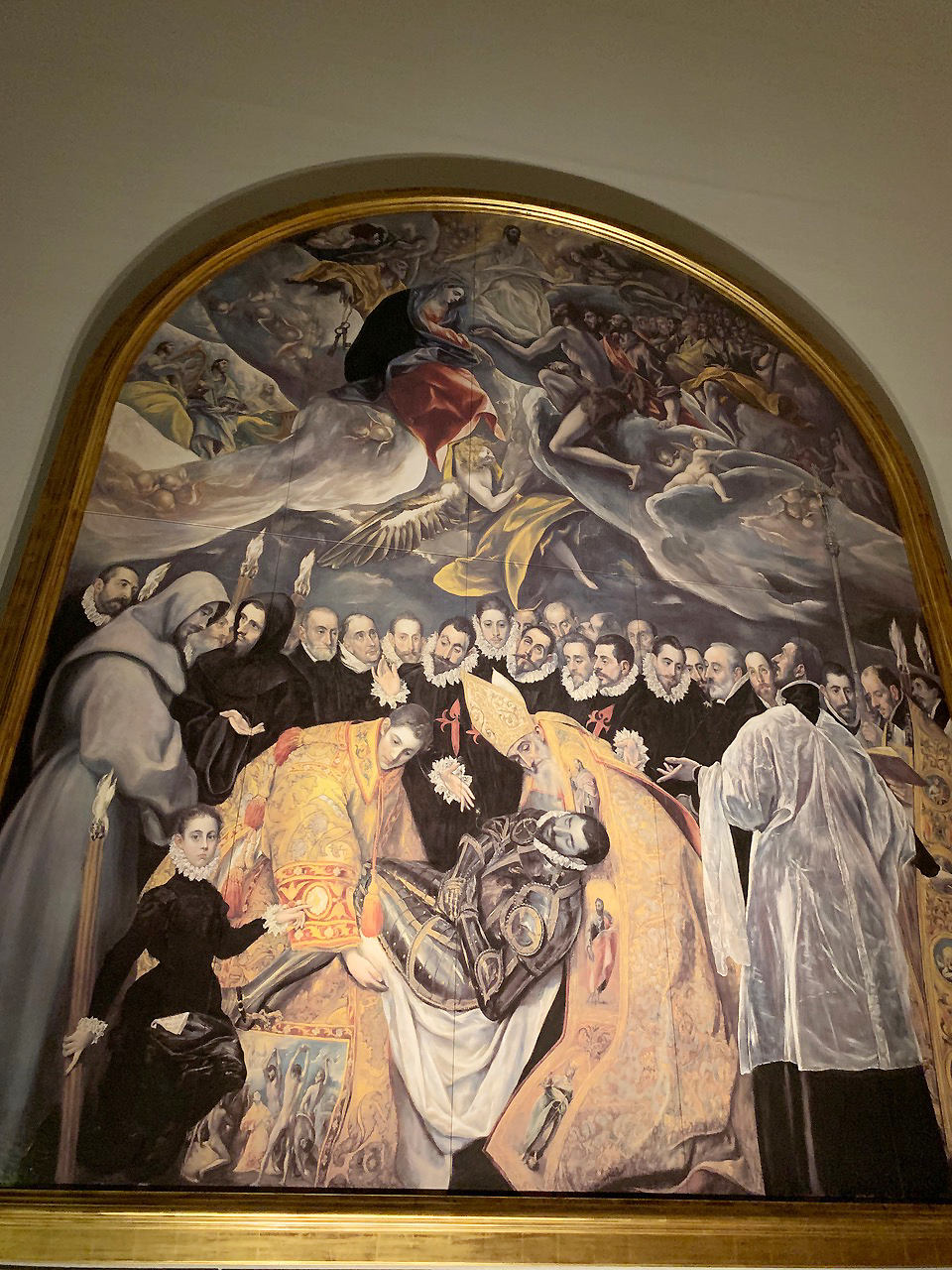 It was built by Enrico Scroveni, a wealthy merchant in Padua, Italy, and is a mural painting of the chapel. Around 1304, the painter Giotto (around 1267-1337) was in charge of the mural decoration in the hall. The sky is a beautiful dark sky blue universe, and the murals on both sides are also mixed with basically sky blue. The paintings include “Last Judgment”, “Life of Our Lady”, “Life of Christ” etc.

This photo is the mural of “Last Judgment” 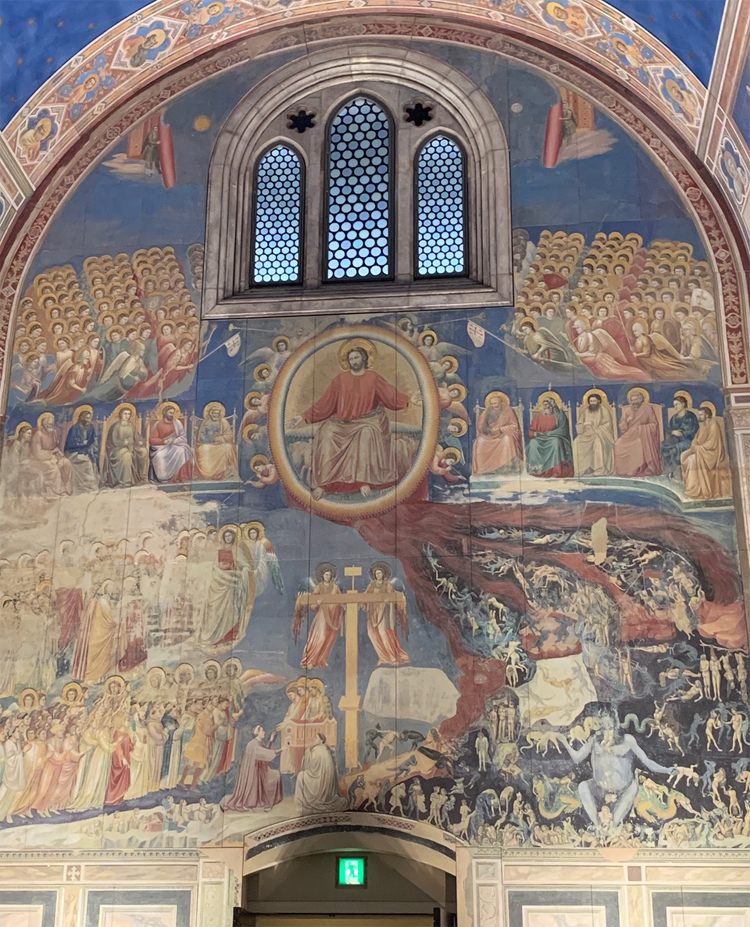 The ceiling painting is divided into two parts, each depicting the sun and the planets surrounding it. One sun depicts “Madonna and Son: Virgin Mary and Christ”. 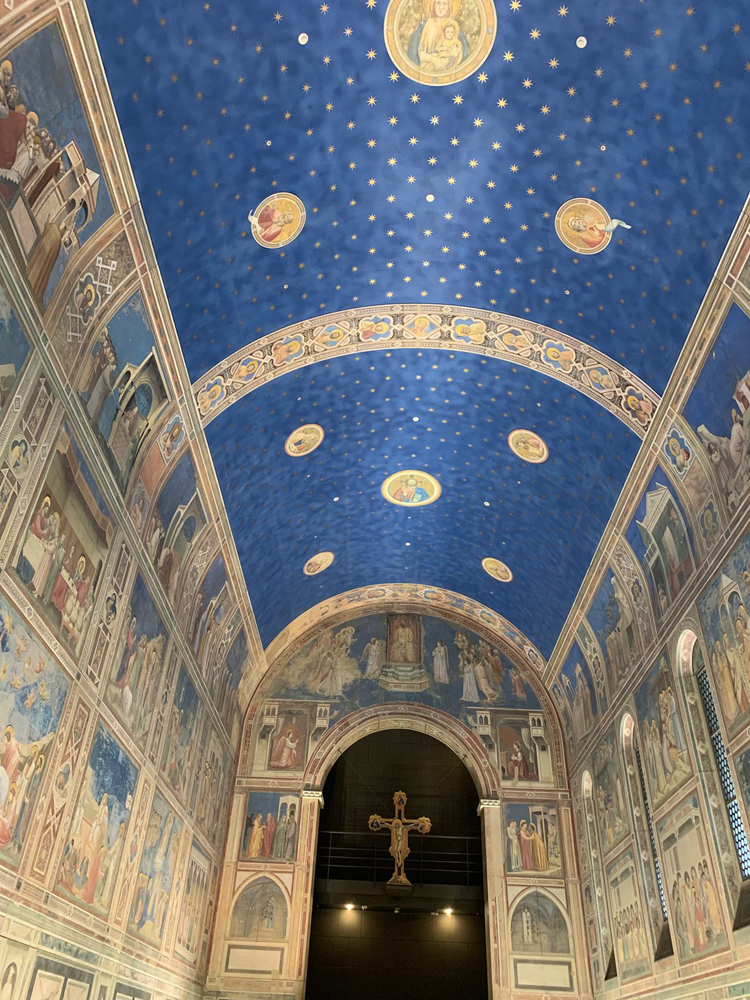 An exhibition of works from the Renaissance period. As you can see in this exhibition map, it’s full of masterpieces… I will briefly introduce some of them. I’m sure all of you are already familiar with it. 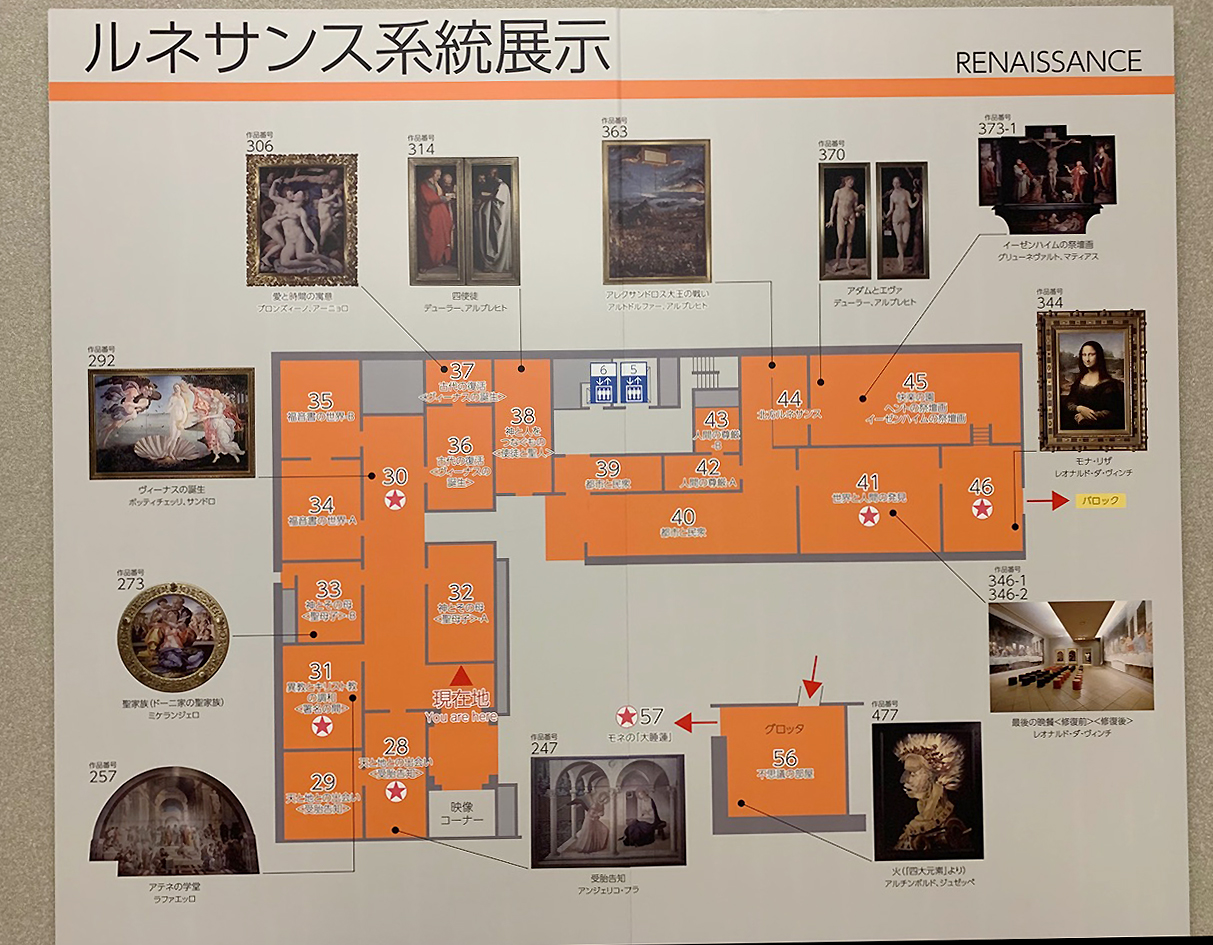 First of all, I will introduce a number of masterpieces of “Annunciation”. A brief description of each painting is provided.

Our Lady sits like a Queen in a chair that is not luxurious but rather rough, dressed simply, and listens to the angels with reverence. The angels are also devoutly joining hands with Maria on an equal footing. The juxtaposed structure, in which the sky and the earth are in correspondence, is truly Renaissance-like. 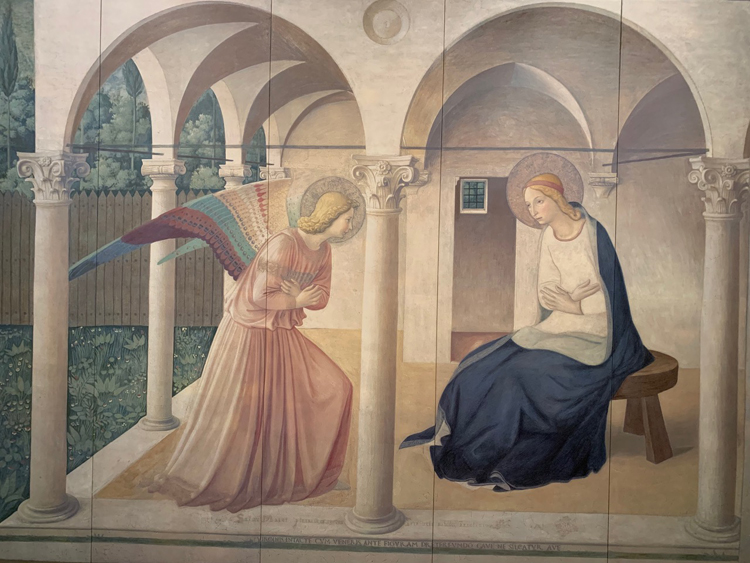 It breaks the Renaissance pattern of the Virgin and the Angel meeting on equal terms. The angel appears hastily to Our Lady and approaches her tensely and somewhat menacingly. The Virgin retreats as if pushed by the force, but looks back at the angel and closes her eyes as if she had resigned herself to her fate. There is a tragic feeling that this proclamation is like the beginning of the drama of redemption that will be fulfilled by the death of Christ. 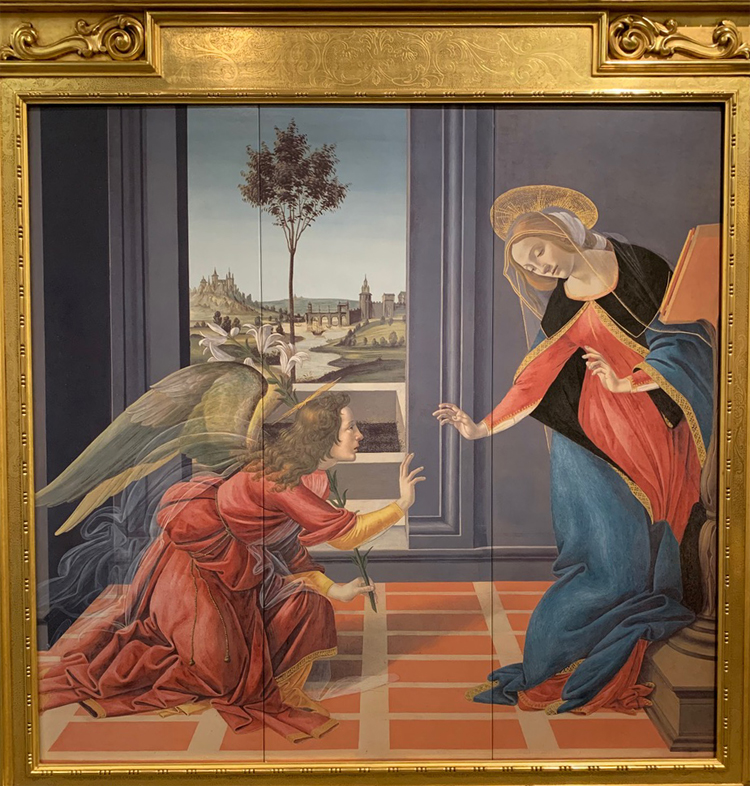 A work that shows the realism of Da Vinci’s youth, such as the space with coherent geometric perspective and the detailed relief depiction of the prayer table. However, it should be noted that Mary has a golden cloth wrapped around her belly, a unique symbol of Da Vinci that signifies the purity of the Virgin’s womb. Da Vinci Code!!

What characterizes Da Vinci is the delicacy of the angel’s profile and spiritual nobility, not physical or morphological beauty, but spiritual beauty.

This is a very famous painting. You may not need an explanation, but I will summarize the commentary.

This painting is said to be paired with another famous painting, “La Primavera: Spring”, from the idea of “Two Venus”. This Venus is a Venus in the heavens, and is said to have governed spiritual love.This painting depicts the pure moment when heavenly love was born. In a sense this is said to be the resurrection of ancient Venus. 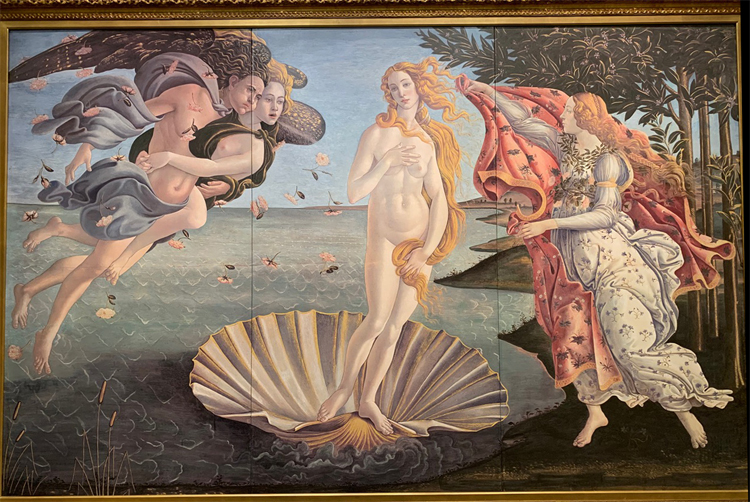 Earthly Venus is placed in the center nobly, with Zephyrus the west wind on the right and the three ancient graces dancing on the left. 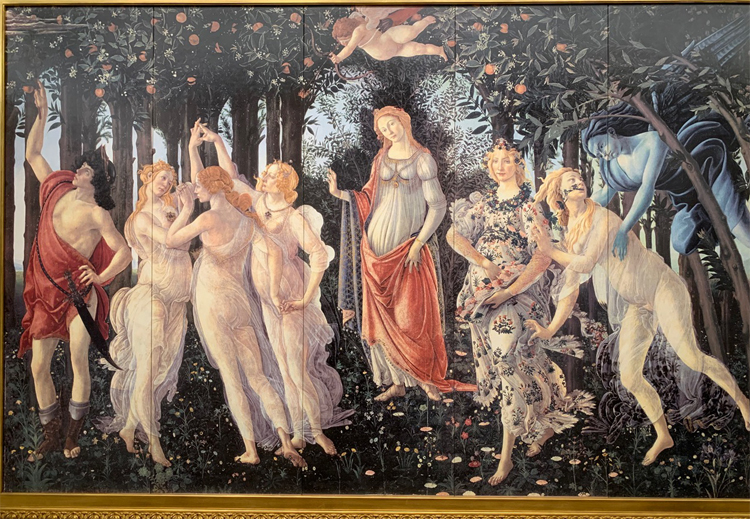 Even though all of the works so far are quite heavy and not the real thing, the fact that they are exactly the same size and displayed in front of me is enough to impress me as a non-professional. It’s still going on more and more, but I’d like to take a break, or put down my notes for now.

And if I have the chance, I will try to post a report on the factory that makes ceramic plates in Shigaraki, so please look forward to it! ! This seems to be much easier than traveling in Europe, so it seems to be possible relatively quickly.

Finally, I would like to introduce the works that I have actually seen in real life recently, and then say goodbye to the Otsuka Museum of Art. The final pieces are by Brueghel the Elder.

When I traveled to Vienna three years ago, I was able to see many of his works (although he himself did not paint many paintings). I was happy to see the Tower of Babel again at Otsuka Art Museum.

It was painted with images of human arrogance, the collapse of civilization, and human discord. The Tower of Babel is found in the Book of Genesis in the Old Testament. Mankind, which has spread to a complete cure, begins to build a huge city that can reach teleportation by joining forces. After God saw mankind’s arrogance, confused people’s language, God made mankind unable to communicate and eventually to abandon construction. In other words, it shows the universal lesson that anything huge that exceeds the appropriate size will perish. 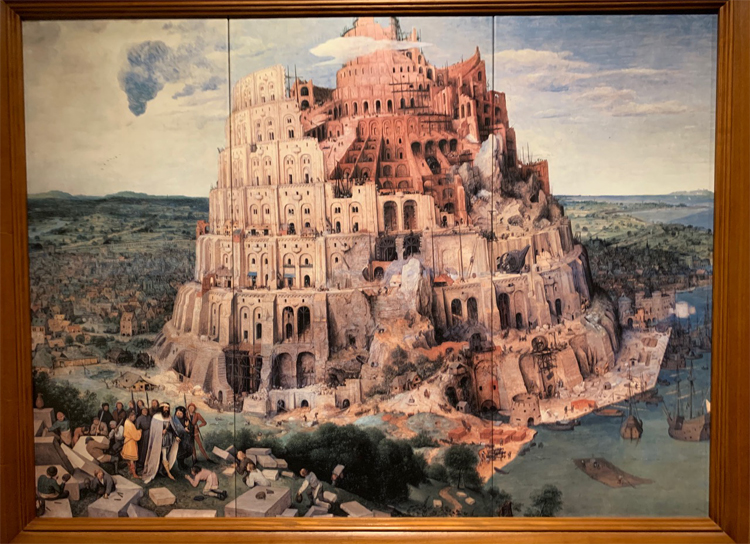 More than 100 children are playing as much as they can in the town. There are many games that we all know, such as spinning wheels, rolling barrels, wooden horses, picking up chairs, pretending to be a wedding, playing in a store, and so on. Perhaps the author depicted many imitations of adult society in children’s play and included the message that the adult’s world is also just a child’s play. 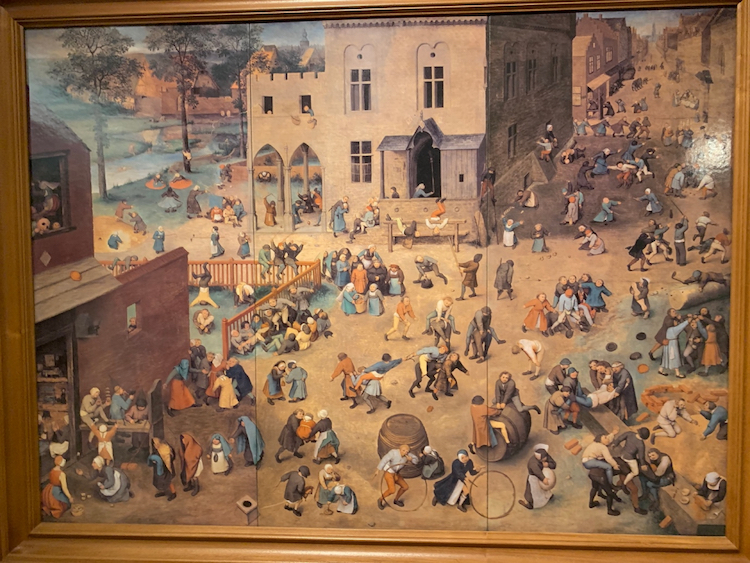 It’s been a relatively random picks of masterpieces. But I spent wonderful time there and this museum brought me wonderful memories and impressions of the paintings I saw in the past. I will look for next opportunity to go around the gallery with no hurry.